Long ago, Koza Han was a place where silkworm cocoons were sold. It became the first textile center in Turkey because the fabrics obtained from these cocoons were worn by wealthy people for many centuries. There are around 1000 years of history in this tradition and it comes from Central Asia. 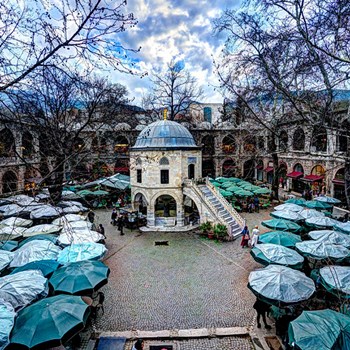 A two-storey building, Koza Han (Silk Market), is a masterpiece of Bursa and one of the most representative example of Ottoman heritage.

On the ground floor there is a sadirvan (fountain) and 95 rooms in the middle of that magnificent structure. The market also provides high-quality but cheap products such as silk fabrics, shawls, and dowery for those looking to buy them.

The building has two floors and is typical of Ottoman architecture with a courtyard in the middle. It's covered and arched, but silk trade as it once existed here is no longer organized so, while there are shops selling silks like garments, scarves and also some table silver that would delight any grandparent, I'm afraid it doesn't compare to what you'll get at other sources for such issues.

In addition to features such as being a newly-built building, this establishment also offers a modern patio with century-old oak trees, or low tables and sofas in niches opposite the shop.