KoskhoyukPlaces to Visit in Nigde

Koskhoyuk is a settlement in the Niğde Bor District first settled around 6000 years ago. A pool from the Roman Period, just next to Koskhoyuk dating back to 1st century AD, shows that Koskhoyuk was active and productive 2000 years ago. The settlement is about 80 meters wide and 15 meters tall.

Archaeological excavations conducted by Dr. Uğur Silistreli in 1981 revealed that Koskhoyuk is one of the most important Neolithic settlements in Central Anatolia and was found to be divided into 4 distinct cultural layers. 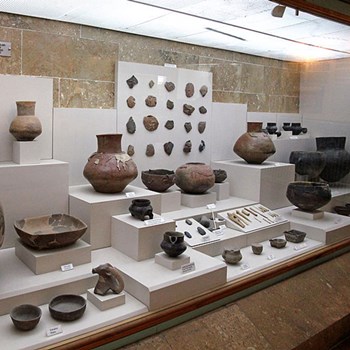 Mother goddess statuettes made out of clay and many ceramics were found in the Koskhoyuk Mound. The ceramics found can be divided into two groups: monochrome, and multi-color. In addition to animal figures, there are shapes on these pots that are geometric.

Stone foundations and building with adobe walls are characteristic of the period that were found in Koskhoyuk. During excavations, 4 clay plastered skulls were found. The process of plastering the skull with clay was first performed during BC 8000 BCE in the Middle East and discovered again at Koskhoyuk during archaeological excavations.

Koskhoyuk is a Neolithic settlement located in the proximity of the Melendiz Mountains in an area rich in obsidian deposits. In Chalcolithic Age, Koskhoyuk was an important center for trade with this material.