Konakli Saint Basil Church is located in Konakli village on the way to Nigde province, about 40 km away from the city center.

The church has a basilical plan and is made of basalt stone. The roof on the middle nave consists of an artex while five small domes cover each side nave. The columns around the entrance are topped with stone, and there are two piers with four columns by the entrance to the hall leading inside. 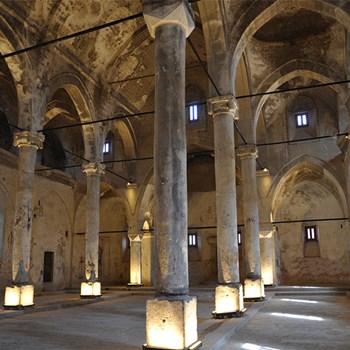 On the front façade, there is a tree of life motif emerging from the vase on the decorative pier near the roof. On either side of this large arch, two small arches are positioned at an angle to balance out its size. A thick molding starts from these smaller arches and rises gradually upwards as it crowns the facade with style.

The window arches are decorated at their top with decorative piers and blind arches. Above the main entrance, there is an inscription, as well as a date of 1844, which can be seen on the door next to it.

One of the largest Anatolian churches seems to have been forgotten in a remote village. However, the Orthodox Patriarch Bartolomeus celebrated a mass here on May 27, 2012 with 500 people from all over the world. It is now being restored and it will be opened to the visitors.