Within the borders of modern-day Tokat, there were two temple states operating during the Hellenistic Period. The larger one Komana was a Cappadocian type temple dedicated to Ma, who is believed to be a Mother Goddess.

The Temple State of Komana also had police status and was used as a trading post by visitors from the area. After VII Mithradates fled, the Temple State of Komana became a principality and was conquered under Pompei in 1st century BC and given to the administration of Archhelau. After he was deposed by Caesar in 47 BC, his son followed. He inherited the principality from the son of Lykomedes Archelaus (of Cappadocia origin), from the son of Lykomedes Archelaus Medeius, Cleon, Dyteutus who was appointed by Augustus served in Komana in turn. With the death of Dyteutus, Komana became part of the Pontus Galaticus Region. 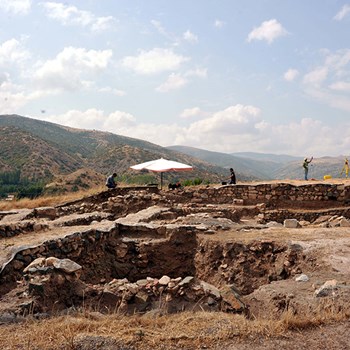 By the reign of Maurice Tiberius (582-602 AD), priests had already begun to lose their power, and the temple was still functioning. During King Region Pontus Period's rule and the period covering Emperor Maurice, it also had status as ager publicus for a while.

The image of Ma, the mother goddess of the temple state, has been on coins since the reign of Emperor Caligula. The only available data we have for the temple are from coin casts provided by Caracalla, Septimius Severus and later Trajan times. A tetrastyle temple is depicted on these coins. There is speculation that the columns of Ali Pasha's Mosque in Tokat belong to this ancient temple.

The temple state of Comana Pontica, which sheds light on the concept of a temple state was a very busy marketplace in interior Pontus. Strabo tells us that 6000 sacred slaves (hierodouloi) were dedicated to the service of Ma by taking oaths and these were working the fields of the temple territory.