The ancient Greek city of Knidos, located near modern Datça, Turkey offers panoramic views of the natural harbour as well as its historic ruins. One of the most picturesque ancient attractions in the region, Knidos includes stunning views alongside its ancient ruins.

Founded by Greek settlers, Knidos was an important cultural and political center by the 5th century BC. The city also served as an ancient trading hub throughout this period. When it first united with its neighboring cities of Halicarnassus and Kos, it became a member of the Dorian Hexapolis - a federation of six cities from Dorian Greek origin. Throughout this period, this alliance served as an important institution for trade for Athens and those in the region who wanted to establish commercial relations with other countries. 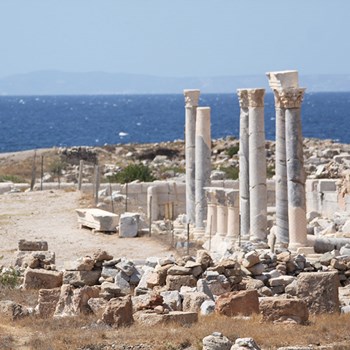 The city of Knidos was famed for its association with Aphrodite--the famous Greek goddess most frequently depicted as a nude female--and for its famous statue sculpted by the renowned classical sculptor Praxiteles. The original statue has not survived, but many copies were made in other ancient cities; one can be found at the Vatican Museums. At Knidos itself, the ornate marble pedestal that it once stood on is still present today.

Along with the rest of the region, Knidos was eventually absorbed into Roman culture and the city survived until Byzantium times - as evidenced by the remains of a number of churches on site.

In the 19th century, archaeologists who first excavated the ruins of Knidos discovered many impressive statues and artifacts. Many remain in London's British Museum, including the Lion Statue and the Statue of Demeter.

The site includes a wide range of ruins which include temples to Apollo, Dionysus and Aphrodite. There are also the remains of some ancient theatres, an agora and Byzantine-era churches. The necropolis is extensive with areas that have yet to be excavated.

The ruins of Knidos are not as well-preserved as other ancient cities in Turkey. Most visitors to the site today come for its scenic views, rather than history.

The celebrated mathematician and philosopher Eudoxus, the famous sculptor Praxiteles who sculpted the naked statue of Aphrodite, Skopas, Bryaxis, and Sostratos are all renowned Greek artists who lived in this town.