Kiziltepe or Dunaysir Grand Mosque was started to be built by Artuqid Beg Yülük Arslan and completed after his death in 1204 by his brother Artuq Arslan. After many years of being left to its' destiny, it has been restored to its former glory.

The rectangular-shaped mosque was built on northwest of modern-day Kiziltepe, and features a long prayer hall preceded by an open courtyard roughly twice as wide. The area is flanked by halls on all three sides, but only the foundation remains on the northern side. Entry to these spaces comes from two sets of portals along one wall each, and a fifth set at the northern end. While 2 minarets once rose at both ends of this section, they are no longer there. 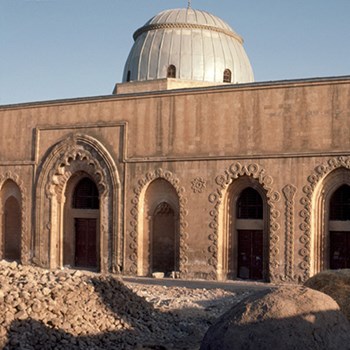 The entrance to the prayer hall is framed with nine archways of different shapes. The arches flanking the portal contain niches for mihrabs while those on the sides have lintels in an open lunette shape. Each one has a unique design, with decorative loops carved into the stone and multi-foliate arches.The large polychrome arch at center holds a grand doorway, which is distinguished by two smaller similarly-colored arches on both sides and topped by a pointed archway that stretches around all three doorways.

The prayer hall is 16 x 63 meters, divided into nine aisles with 2 arcades. Adjacent to the entrance in the center of the room is where people will find the Mihrab and Minbar, alongside a dome that spans 10 meters across. The surface of the mihrab niche is finely carved with intricate designs that are interlaced and arabesque. The mosque, which is lighted above with four windows between the squinches and six arched windows around the tall drum, has numerous casement windows between projecting buttresses on its three exterior walls. The exterior of the elongated dome is covered by aluminum panels.