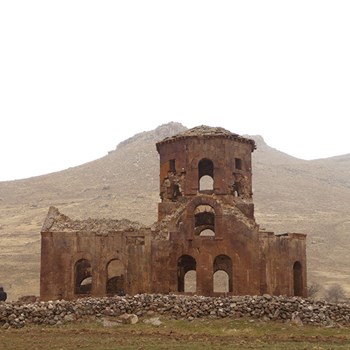 The building was probably erected during the sixth century, during the reign of Emperor Justinian I (r. 527–565) and is one of the oldest Christian churches in Cappadocia. It may have been dedicated to Saint Gregory of Nazianzus: one of the early Cappadocian church fathers who lived between 329 and 389 AD and patron saint of Ihlara Valley and Guzelyurt areas.

Throughout Central and Eastern Cappadocia, from the fifth to the sixth centuries churches found a plan design with cross-shaped floorplan common. Kızıl Kilise Church takes on this exact form. This church is made of volcanic stones that are cut into regular blocks by highly skilled workers who exemplify architectural form. The most special aspect of this chapel is its central dome raised over an octagonal drum.

There are eight windows that penetrate the drum, flooding the nave with light. As the only addition to an otherwise original building, the narthex is still intact. The architecture hints at its possible use as an imperial or burial chapel and many pilgrims could have easily found their way here on their pilgrimage to Jerusalem even though it is located in the middle of nowhere nowadays.