During the period of Cizre Principality, Kirmizi Madrasa was built by Han Şeref Bey in 14th century. It is written in old records that the Emirs of Cizre were expelled from their city when Akkoyunlu seized in 1475. When Emir Bedrettin's son II. Şeref (Hanşeref) prayed for conquest and Allah rewarded his prayer, he managed to take over Cizre with help of Boti tribe and people in its surrounding areas. He had promised to build a mosque if he could claim back the city , this made him build Red Madrasa. 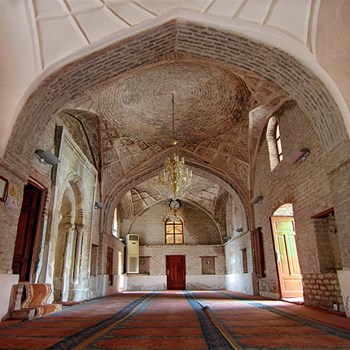 In the building, the tomb Sheikh Ahmed El-Cezeri - a famous writer and commentator – is located . Nearby, apart from this tomb, there’s an Emir's graveyard section. Some of the areas in need of conservation are classrooms, dining area, and teacher lodgings on the east, west, and north side.

The altar of the mosque is made entirely out of white stone, measuring 2. 82x3. The diagonal of the mihrab measures 55 degrees and consists of concave triangles that wrap around in a semicircular shape before heading inward on themselves at the bottom half (thus forming an inverted U-shape). The mihrab space is semicircular with a striking brick dome resting above it but not touching it.

A square planned room in southwest of the madrasah is decorated with beautiful motifs. This room was used as a professor and muderris (chief prayer leader) meeting room.

The madrasa is called the Red Madrasa because it is built of red bricks which are characteristic to Cizre.