Kilistra (Lystra) Ancient City was founded during the Hellenistic and Roman periods, dating from approximately 2nd century BC through 3rd Century AD. It is located about 49 km far from Konya.

During excavation, the name "Kilistra" was found inscribed on a Roman epitaph from the eastern grave being used as a threshold stone. Kilistra, during Byzantine age, also appears to have rock-carved settlement similar to ones in Cappadocia. 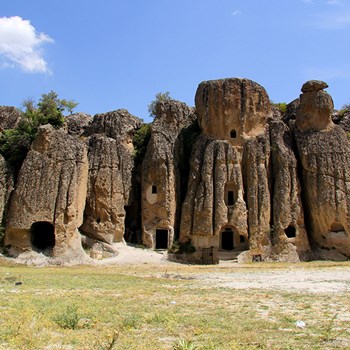 Lystra, a city in Turkey, is located halfway between Ikonion and Pisda Antiocheia. Paul of Tarsus may have visited the city on his journey from Jerusalem to Antioch. Timothy was also a resident of Lystra while St. Paul wrote letters addressed to him as well as two other pastors from that town.

One of the most commonly explored hidden cities is Kilistra, which is believed to be under threat from Pagans and looters. The people of Lystra are thought to have placed themselves in a particularly mountainous area as a way to shield themselves against attackers.

You can reach the ancient city of Kilistra by following the King's route, which is located east of Hatunsaray. The first part of this road (the main entry points to the old town) has stone flooring with limited damage and offers great views. You'll find yourself at a look-out tower in one direction and in front of a police station building if you keep driving up that road. If you follow this antique road to enter the heart or historic ruins you will be able to explore among meeting halls, typical caves, tombs and other public buildings.

Sandıkkay Chapel, situated in the south, is carved from one piece of rock on the inside and outside. The decoration around it complements the chapel's beauty.

The other entrance of the King's route going over to the west also has an observation tower and police station. There is also a cistern where you'll find "Kapçı cave" which was used in pottery making in the latest periods. The next main site is the Sümbül Church. It's called the "Paulönü Location" by locals and can be found south - west of the village mansion. If you want to view a landscape containing both nature and history, head to this church. You'll be able to see all varieties of green in the valley next to it, including double wine houses in the söğütlü stream bed and irrigation trenches.

The grand cistern in the Ardıçlı Hill is a three-naved, magnificent rock, one of the most attractive assets of the site. Turkish grape - houses along the stream bed and their water - channels on the western side of the cistern are also worth seeing as they add to its beauty.