Kesikköprü han is located on the Kirşehir-Kayseri Road, 18 km south of Kirşehir on the right bank of the Kızılirmak River. It lies next to a stunning Seljuk Bridge spanning the river. 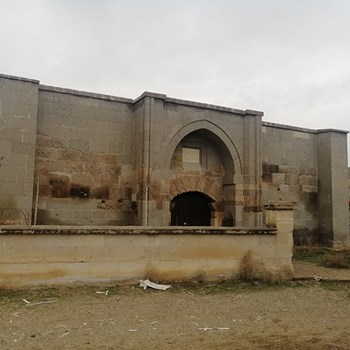 This bridge, one of oldest Seljuk bridges in Turkey, has 13 arches and still possesses its original ornate inscription plaque. The Kesik Köprü Han was built in the time of Anatolian Seljuk Sultan Keyhüsrev III, son of Kiliçarslan IV, by Emir Nureddin Cebrail Bey in 1268.

The old caravan route out of Kirşehir lead right to the entrance of the Han, after which it continued east towards Kizilirmak. The han was positioned near the headwaters of one of the longest and most storied rivers in all central Anatolia-Kızılırmak (Red River).

Although the original stone bridge used limestone, it was later restored with other stones. The arch bridge has 13 arches, and its feet are supported by triangular bulges. Although still standing, the road passes over a modern bridge constructed about 180 meters to the west.