Kayseri CastlePlaces to Visit in Kayseri

Kayseri Castle and Walls were built in the 3rd century in the Roman Period by Gordian III and narrowed during the Byzantine Period by Justinian. In 13th century, Seljuk Sultan Alaeddin Keykubat I rebuilt it to its present form, at which time it was repaired twice due to collapses - once by Karamanoğulları and again by Osmanoğulları. 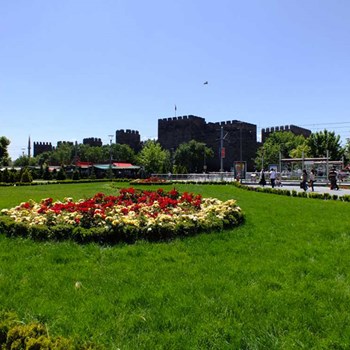 The castle, which protects the center of Kayseri and is about transportation routes in Central Anatolia - was established on a flat surface and consists of two parts as the Outer Castle and Inner Castle. The Inner Fortress was built higher than Outer Fortress and fortification walls were added around it, making it a separate fortress. there are 18 towers at the castle.

Outer Castle: With all the walls and bastions, the protection of the city consists of outer walls and bastions. This includes administrative centers, housing areas, and fortification installments surround ancient state halls to defend from enemies.

Inner Castle: During the Turkish Period, the surrounding Walls and Bastions were up-graded and changes were made in the way of use. Since there was no need to defend the city during Ottoman Period, neighborhoods were established in Inner Castle and building Fatih Mosque took place during this period.