Kayalipinar is a village located approximately 50 kilometers from the main city of Sivas. Archaeologists discovered evidence of an Hittite settlement there during excavations. The town is believed to be Samuha, one of the important cities of the Hittites.

The old names of five Hittite settlements excavated so far is known, and the discovery that Kayalıpınar was Samuha was considered an important one. 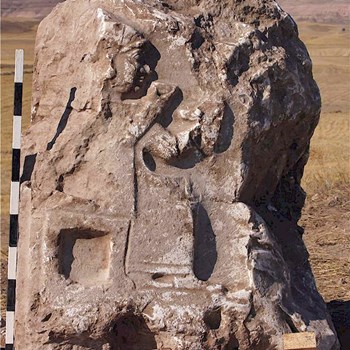 Samuha was originally a small market place for Assyrian merchants to trade, but developed into an important trading center in the 18th century BC. During excavations in 2014, written documents on Samuha were discovered along with an Old Assyrian language tablet of a merchant from Anatolia.

It can be learned from written sources that the Hittite King Telepinu (~1500 BC), who ruled during the late Bronze Age, built an official warehouse in Samuha, which was an important city during the Hittite Kingdom period (17th-13th century BC), while some Hittite great Kings ruled the country.

It is known from the tablets that in the 16th century BC, King Tuthaliya came with his palace advisors and ruled from here. He even died at Samuha. King Suppiluliuma I, Tuthaliya's son and the next king, was known to have come out of Samuha as well. During the excavations, many seals belonging to Hittite kings, princes and officials were found.

A limestone block in the city which is about 1.2 meters high and 1 meter wide, depicts a deity with a demi-cone shaped head piece, holding a drinking cup and sitting on stool. The stone carving of the bird is visible but only covers about half of its body. The stone figure of the chair displays a seated person and an additional foot protruding from the back. This relief is found on other Hittite carvings, which suggest it dates to around 13th century BCE or earlier. It was moved to Sivas Museum, where a replica was placed at its original site.