Kayaköy - LivissiPlaces to Visit in Mugla

Kayaköy, anciently known as Livissi in Greek, is presently a village 8 kilometers south of Fethiye in southwestern Turkey.

The region's population had become Christian by the time of late antiquity and following the East-West Schism (The East-West Schism occurred in 1054 AD when a formal split between Western Catholicism and Eastern Orthodox Christianity divided them into separate churches), they were called Greek Orthodox Christians. Greeks living alongside their Turkish rulers lived peacefully from the end of this turbulent Ottoman conquest in 14th century to early 20th century. 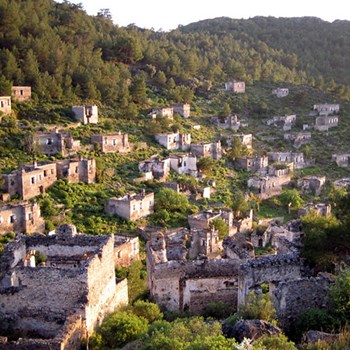 Livissi was a thriving Greek town before the Greco-Turkish War of 1919-1922 and following the subsequent Treaty of Lausanne in 1923, its Greek Orthodox residents were forced to abandon Livissi.

That treaty contained a protocol, the Population exchange between Greece and Turkey, which barred permanently the return of any previous Greek Orthodox refugees to their homes in Turkey (including those from Livissi) and required that any remaining Orthodox Christian citizens of Turkey leave their homes for Greece (with an exception for Greeks living in Istanbul).

The Treaty of Lausanne also required that Greece's Muslim citizens permanently leave Greece for Turkey (with an exception for Muslims living in Greek Thrace). Muslim inhabitants exiled from Greece found the land in Livissi (Kayaköy) inhospitable and soon decamped, leaving a hillside village abandoned for a second time.

Kayakoy - Livissi, now preserved as a museum village, contains hundreds of rundown houses and churches that cover a small mountain slope. The structures were once inhabited by Greek-style residents but are now used as resting points for visitors to Fethiye or Öludeniz.

The village is now empty aside from tour groups, roadside vendors selling handmade goods, and a selection of houses restored through ongoing efforts.