Kastamonu CastlePlaces to Visit in Kastamonu

Kastamonu Castle is located in the center of the city, perched high on a natural rocky area. It sits at an elevation of 860 meters (2,820 ft), and slightly to the south west of where you can find most businesses. 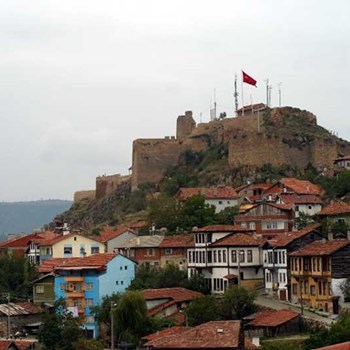 During the 10th century, the area around Kastamonu was under the rule of Byzantine commander Manuel Komnenos who built a fortress bearing his name and living quarters for himself: Castrum Komnenon. This later became corrupted into "Kastra" or "Castle" and eventually Kastamonu. It was captured by Çobanoğlu on behalf of Seljuks of Rum during a siege against Byzantines between 1080-1090 CE.

The castle has changed hands several times, from the Çobanoğlu to the Candarid beylik to Ottoman Empire and finally The Turkish Republic. In 1943, a part of it was destroyed by an earthquake. There have been some efforts to restore the castle since 2005.

The originally fortified castle wall was all around the city, but presently only the inner castle with fortification is partially standing. The north to south dimension of the castle is 155 metres (509 feet) and width ranges between 30 metres (98 feet) and 50 metres (160 feet). There are 15 bastions and a secret passage to the outer fort.