Kasimiye Madrasah, which has survived to this day with its perfect structure, was established in the Artuklu Period, and completed under the reign of Akkoyunlu Ruler Cihangiroğlu Kasım (1457-1502). A two-storey, domed, single courtyard madrasa was constructed with smooth cut stone. The first patron was İsa Bey of the Artuqid dynasty. However, he died before the madrasa was fully constructed and construction resumed after the city fell to Akkoyunlu Turks. Kasım, one of the sons of Akkoyunlu Sultan Mu'izz-al-Din is credited with completing the medrese which opened in 1469. 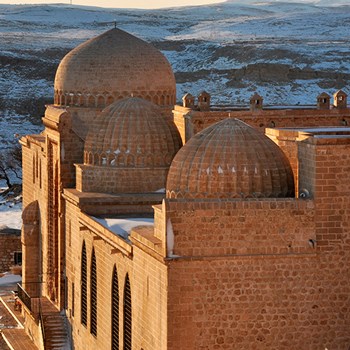 Kasimiye madrasa, which is architecturally formidable due to its design features such as plan layout, stone workmanship and ornamental motifs drew attention. In addition to the mosque and abandoned mausoleum that are part of this complex, Kasimiye consists of an open courtyard where a fountain and large pool can be found. It has two floors with two wings arranged around it so that classrooms are located on each side separated by cells for young boys who attend classes at various levels depending on their age.

The building is entered from the south facade through a barrel-vaulted corridor connected by a portal. There is an independent small mosque in the west with the same entrance as other parts of the building. The mosque rises over two floors on the east side and consists of cells lined up between porticos on both levels around a large courtyard with portico, which is accessed through a central plaza. The north courtyard includes a large Iwan that bisects the second floor and in front of it is a small pool. This place was not intended to be seen as one madrasa but rather as part of a larger complex, much like the lodge-tombs located next to it can confirm.