Kars Castle was built 1153 A.D and is located in the city center. It was most likely created by Vizier Firuz Akay on orders of Saltuk Sultan Malik Izzeddin. The castle is a stone building with a commanding view over the city. 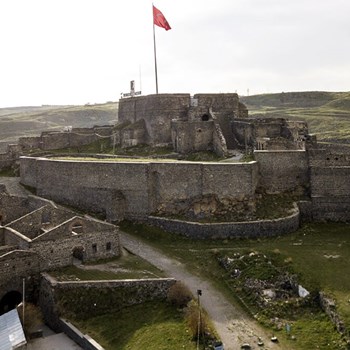 In 1356, Kars Castle was destroyed by Timur's troops. In 1579 it was rebuilt by Lala Mustafa Pasha, an Ottoman general. The castle has been burnt down and rebuilt several times.

In the beginning of the 19th century, Kars Castle lost all its military functions which were taken over by several newly built forts around the city. In about a fifty year span, during and after Russian invasion in 1878, it was conquered and badly damaged.

The castle was built with basalt masonry and would have had 22 towers. But only 7 of these remain today. There are 4 gates, but only 2 of them are still functional. Inside the castle there is a tomb for Jelal Baba, remains from Janissaries barracks, an ammunition depot and mosque which was rebuilt in the 1990s.