Karatay MadrasahPlaces to Visit in Konya

Karatay Madrasa is located in Konya, one of the biggest cities of modern Turkey. Karatay Madrasah was built during the reign of Izzeddin Keykavus, between 1250-1251. The architect is unknown. It is thought that it was built by Celalettin Karatay, since the domed cell on the left of the iwan is his tomb and is registered with the Celalettin Karatay Foundation. Its use in Ottoman times continued until at least 1892 when records show use as a barracks for 70 recruits although this may have just been temporary arrangement.

This madrasa was constructed of Sille stone in the "closed madrasa" style during Seljuk rule and is single storey. The entrance is made from a door with sky-blue and white marble that's carved to include intricate lettering. 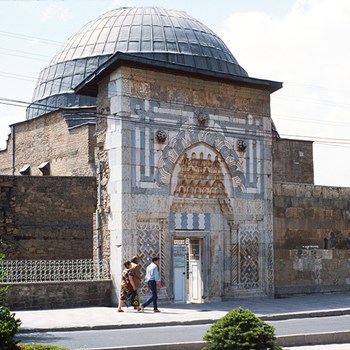 There are verses and hadiths about the construction of this madrasah on both sides of the door. The courtyard, which once had a dome covering it, was entered through this door.

The madrasa hall is covered with a dome, and on the dome there are panels that have invocations written along the borders. They are four verses from the Quran, as well as names of Prophets Muhammad, Jesus, Moses and David. There is also writing above doorways in smaller letters, which spells out "Ayet-el Kürsi".

Almost all of the mosaic tiles on the madrasah walls have been shed. The colours used in these mosaic tiles are turquoise, dark blue and black. Karatay Madrasa, which is an important example of Seljuk Anatolian tile work from the 12th and 13th centuries, was opened to visitors in 1955 as the "Tile Works Museum".