Karatay CaravanseraiPlaces to Visit in Kayseri

The Karatay Han is a caravanserai located in the village of Karadayi, 50 km east of Kayseri on the Pinarbasi-Malatya Highway. The han is notable for being near to the Yabunlu Bazaar, an important trade fair from 13th century time period.

Construction of the han started during the reign of Alaeddin Keykubad and was completed in 1240-1241, during his son’s rule. 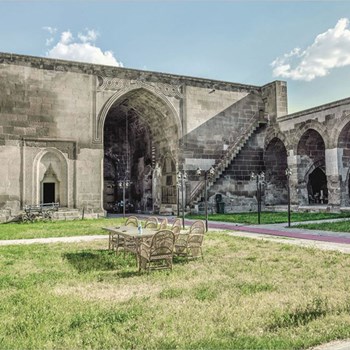 This site is perhaps the best preserved of all Anatolian hans, and is one of the most monumental examples of Seljuk architecture. It is especially famous for the relief sculpture on the walls of the tomb and on pillars in external walls. Unlike many hans, this site contains an integrated bath, mosque and infirmary which entailed initial planning from a building layout perspective.

The han is oriented to the north-south. The structure consists of a covered section used for lodging that was built first and an open courtyard, lined with service facilities, next to it. Entrances into both sections face south. The courtyard is entirely open with the mosque to the right side and arcades to the left. A burial tomb chamber can be found on eastern facade, decorated in a rectangular frieze of animals, geometrical shapes and bird patterns.