Karaca Cave is located just southwest of Karaca Neighborhood, Torul District, in Gümüşhane. It's 17 kilometers from the city center and at an altitude of 1550 meters from the sea. Karaca Cave, which takes its name from the neighborhood of the village where it is located, is a masterpiece that nature has created over millions of years with patience and care.

IThe cave attracts its visitors from the first moment. In the first step you take, you move forward with anticipation of discovering something new. The shapes created by light and shadow in countless interconnected formations take you away from the world outside and transport you to a fantasy land. Notwithstanding, beneath this dreamlike state lurks an intricate but subtle fear that sends shivers down your spine-the reality of man's insignificance before nature is felt everywhere within these earthly walls. In Karaca, we are not kings over nature but humble servants to it instead. 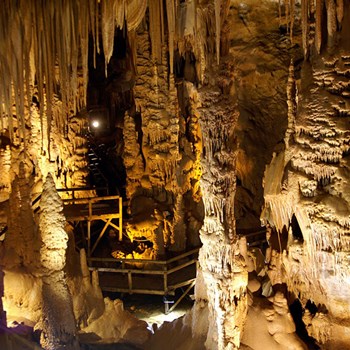 The Karaca Karstic Cave stands out for its karstic formations that developed within the dolomitic limestones. Nearby locals knew of its existence and legends were told about its discovery, but it became scientifically known in 1990 with Geology Engineering Specialist Şükrü Eroz's studies.

Each drip of water became a master at striking the hammer and adding mortar to this extraordinary structure. This karst masterpiece; stalactites, stalagmites, columns, dripstone pools, curtain dropstones, cave needles, cave roses "and "cave flowers formed over time through natural erosion and continue to form. The presence of travertines in various colors from white to dark blue shows that minerals such as iron and magnesium which make up these travertines are very dense.

Karaca Cave is a dry cave, and water leaking from the ceiling and walls have created ponds on the ground. The depth of these ponds reaches 1 meter; stalagmites/stalactites are formed in about 12 years at a rate of 1 centimeter per year. Karaca Cave stands out among other caves due to it's color scheme, which consists mostly of tan and yellow with multicolor accents.

The entrance to the cave starts at human height and gradually expands as you go in. The space inside is 1500 square meters, with a length of 150 meters from the entrance point to its innermost point, and an average ceiling height of 18 meters.

The cave offers therapeutic benefits for asthma patients, due to the cool, humid environment which is free from allergens. The cave naturally filters out dusty air and allergies, making it a cleaner environment for visitors to breathe. The temperature is cooler in the summer and warmer in the winter.