Kapidag Peninsula, a wonderful place in Marmara region, offers unbelievably beautiful sights to travelers with its authentic lovely villages, ancient history, rich flora, lush forests and small waterfalls. Kapidag peninsula, which is surrounded by the islands of Marmara, Avsa and Pasalimani, is easily accessible to travelers passing through Balikesir as well as popular weekend getaway for many who are getting away from the hustle-bustle of city life.

Mounts within the northern and western parts of the peninsula have a height of 700-800 meters. The area is rich with water resources, which are used for irrigation purposes. Erdek Gulf and Bandirma Gulf are at the point where the Aegean coast meets land. Kapidag Peninsula is an example of what a tombolo looks like when it forms areas such as this one which connects two bodies of water that are separated by a piece of land, forming an island. 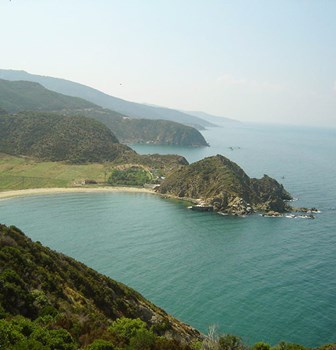 Kapidag Peninsula offers plenty of opportunities for active types who love nature. Nature lovers can walk around the peninsula on a daily boat tour, or take part in activity clubs such as trekking, camping, mountain biking, windsurfing and safari tours that are more adventurous to discover Kapidag's natural beauty.

In Kapidag, there are many cove areas to enjoy the sea. And eastern coasts of the peninsula provide several lodging options for those who want to stay at night.

The oldest known settlement in this region is ancient Kyzikos. Kyzikos or Cyzicus, was probably founded as a colony of Miletus in 756 BC. Situated at the entrance to the Black Sea and surrounded by the hilly region of Thrace, it soon developed commercial importance.

Cyzicus was first under Persian rule after the collapse of Lydia (c. 544). The town then joined the Delian League and remained loyal to Athens until 411 BC when it allied itself with Rome. In Hellenistic times it came close to Pergamum, but later in AD 675 an Arab invasion destroyed part of the city and earthquakes shattered its remains over several hundred years. Among these ruins is the Temple of Hadrian which is sometimes ranked among the Seven Wonders of the World by scholars.

From the colossal temple dedicated to the Emperor Hadrian, only some foundations are still visible. Its' columns were 21.35 meters high - the highest in ancient world. In addition to Ancient ruins, a better part of the ancient city wall from around the 4th century BC exists as well as remains of a large amphitheatre built in the 3rd century BC and parts of Roman aqueducts.

The Byzantine emperor Justinian used Cyzicus as a quarry during the time of Saint Sophia cathedral in Constantinople. The Ottomans continued this tradition and were later responsible for destruction among the ruins of Cyzicus.