Kanlıdivane or Kanytella ruins are roughly 50 kilometers away from Mersin. The ancient city was established around the Kanlıdivane pothole, which is one of the largest potholes, with an area of 12000 square meters and a width that measures 170 x 200 meters. 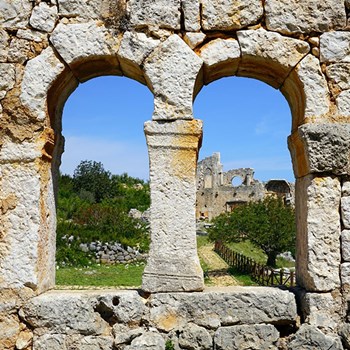 Kanlıdivane may be a corrupted form of the ancient name Canytelis, which translates to "bloody crazy" in Turkish. It may refer to the red color of the nearby soil or a legendary legend about criminals who were executed by throwing them into the sinkhole during Roman times.

Written historical texts suggest that Kanlıdivane was a part of the Olba dynasty between 2nd century BC and 1st century. It served as passage to reach the sea in Roman times. Greece incorporated it into its territory when they governed Antioch during time of Byzantine rule, via Eliaussa Sebatste chora. Texts from early Christianity indicate that Byzantines inhabited the area too. One would have found many graves in what is now a city center, while churches were built there during Late Antiquity (4th through 6th centuries AD).

Interesting structures can be found both inside and outside Kanlıdivane's centuries-old city. Rampant ruins of stone pavements still surround the area, as well as many cisterns that were built to catch rainfall before it could seep to the ground below. Nowadays, concerts are often held in Kanlidivane due to its excellent acoustic qualities.