Grand Mosque and Tas MadrasaPlaces to Visit in Kahramanmaras

The historical Kahramanmaraş Grand Mosque is in the south of the former castle and north west of the covered market. It was built by Süleyman, king of Dulkadirids who reigned between 1442-1454. In 1501-1502 it was renewed by his son Bozkurt.

The mosque has a wooden roof and unlike most mosques where the minaret is built as one with the mosque, the minaret has been built in the courtyard in this one, which makes this mosque special and unique. 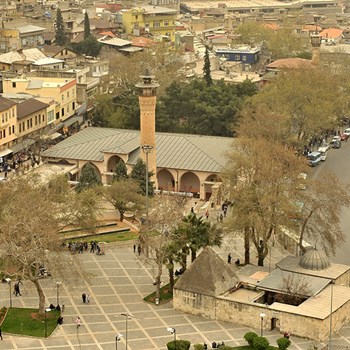 The Grand Mosque was part of the group of mosques that had wooden ceilings. 22x40.90 m by exterior measurements, with a harim made with dimensions of 5.30x40.90 m features scattering and rubble stones on its façade walls, which are clean cut and leveled but rough in texture. Decorations on the minaret, portal, mihrab and pulpit represent an architectural style that combines Seljuk architecture with artwork from principality period.

Tas Madrasa that forms an alignment with the older Grand Mosque in the city square were built by Dulkadirli Alauddevle Bey at the end of 15th century. The building, which reflects a madrasah plan with a single storey and open courtyard, is completed with masjid in south, the open courtyard and student room behind it. Clean cut stone work and Mamluk style muqarnas window application are important features.

The Tomb Section was built in 1510 for the son of Alaüddevle Beye. The structure is square-shaped with a pyramidal cover on the outside. Additionally, it has a dome from inside that encloses six sarcophagi - one belonging to his daughter and the other five belonging to national heroes in the War of Independence.