Kadioglu MosaicsPlaces to Visit in Zonguldak

The area of Kadıoğlu mosaics is now located inside the boundaries of Çaycuma District, near Kadıoğlu Village, about 45 km far from Zonguldak city center. In 2008, an excavation was undertaken in order to preserve the long-known mosaics that were extant on somebody's private land.

Led by Handan Özalpay, excavations of the ancient settlement uncovered mosaics estimated to be from AD 250-260. Archaeologists noted that a single silver coin was found near the mosaic in the garden area as well. 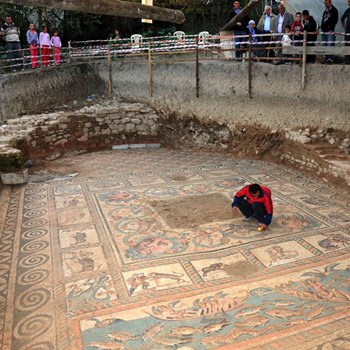 The Ministry of Culture and Tourism had been working for over two years to rescue the Roman period mosaics found at Kadıoğlu. In addition, they gained significant knowledge about the history of Çaycuma. The mural uncovered at Kadıoğlu resembles those that were found in Zeugma, and during the last season excavations revealed only lower half of an image from a local villager.

The ruins could be from an ancient farmhouse dating back to the 3rd century AD. There are three rooms with mosaic floors, and one of which has a mural depicting Lykurgos and Ambrossia. The other two murals measure 5.8 by 5.8 meters, while there are also some geometrical patterns drawn over a larger area measuring 4.2 x 10.2 meters in size. It is 15 metres away from Kadıoğlu Village Road and 7 metres below the road's elevation .

A project to protect Kadıoğlu’s mosaics and provide information has been designed. The aims of the project are to protect the mosaics from weather conditions and enable visitors to see the artwork up-close, thereby giving them access to all relevant information on site. The ruins measures northeast-southwest along a line; therefore, we placed the visitor center parallel in order that visitors can achieve both objectives with ease; our entrance is situated southwestward approximately 3 meters below village road level.