İztuzu Beach is a 4.5 kilometer long beach near Dalyan in the Ortaca district of Muğla, southwestern Turkey. The beach is one of the main breeding grounds for loggerhead sea turtles (Caretta caretta) and because it's often referred to as Turtle Beach it can get quite busy when they are laying their eggs from May to October. 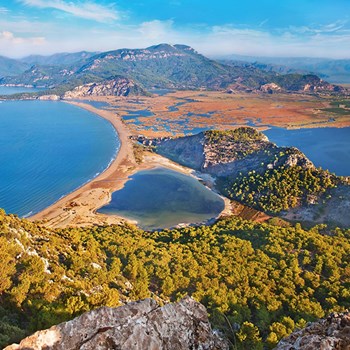 The loggerhead turtle is on the IUCN (International Union for Conservation of Nature) Red list of endangered animals. For this reason, the beach has had a protected status since 1988 and is part of the Köyceğiz-Dalyan Special Environmental Protection Area.

Every year in early summer, sea turtles come to the beach where they themselves hatched and nest between 50-150 eggs. After hatching two months later, baby turtles begin to walk towards the sea which is full of danger. However, baby turtles are born with a knowledge of what they need to do for survival. Unfortunately, it's not enough just reaching the ocean because only one out of every 1000 can make it until puberty. These caretta caretta sea turtles visit nearly 20 beaches in Turkey each year to lay their eggs.