The Ismail Bey ComplexPlaces to Visit in Kastamonu

The Ismail Bey Complex in Kastamonu had been built between 1443-1461 AD by Kemalettin Ismail Bey, the ruler of the Candaroğulları Dynasty. An arabic inscriptionindicates that it was built in 1457. The complex was built on Şehinşah rock which has two rock tombs from the 7th century BC.

This settlement is located outside the city walls to develop settlement areas and provide a three-dimensional plan for the cultural center. 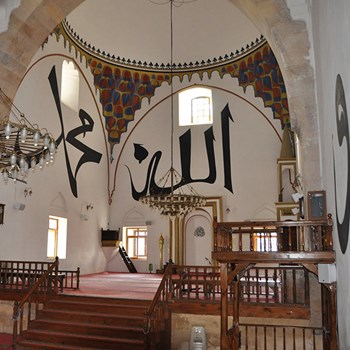 The complex is formed by: - an inverse planned public kitchen - a square planned tomb —an open courtyard and single Iwan, a (U) shaped and single floored theological school which has a Sibyan School (primary school) that is designed to serve both in winter (this part in closed), and in Summer (this part open air), - an Inn having on entrance and no division, -and a single domed Turkish bath with sıcaklık (a section of the bath) along its width.

This complex has been repaired many times over the course of different ages. The imaret, theological school and tomb are still mostly preserving their originality; yellowish kefeki stone was used as the main material in construction. Rough stones were used as filler between walls while smooth stones served as exterior surface on some portions. In addition, a type of brick mixture compromising mainly rough surfaces is seen in primary structures and inside inns.

The structures forming the complex are so simple that only expressive parts of the structure like portals, domes etc. have some ornamentation. This gives it a dynamic feel because the structures themselves are only made from basic elements. Ismail Bey Complex provides an important example for analyzing location planning and material techniques.

The complex reflects the highly organized foundations of settled life in Anatolia. It also shows that this kind of structures were not only built during the Early Ottoman Period, but they existed throughout history as well. More importantly, it was built at a time when dynasties ruled instead of an empire.