The Isfahan Bey MosquePlaces to Visit in Bingol

The Isfahan Bey Mosque was made in the form of a rectangle with the Akkoyunlu Architecture at the beginning of the 16th century. Isfahan Bey donated his real estate to this area at that time. The exact construction date of the mosque is unknown, but it is the only historical building in the city center. Isfahan Bey was one of the Suveyd lords, and after the death of his father, he ruled for a long time in Bingol area between 1514 and 1549.

The mosque, built in the 1500s, has a square plan covered with a roof and its exterior has been plastered with new material in recent years. The windows, door jambs and corner stones are made of smooth cut stones, while the body walls are made of chipped rubble stones. 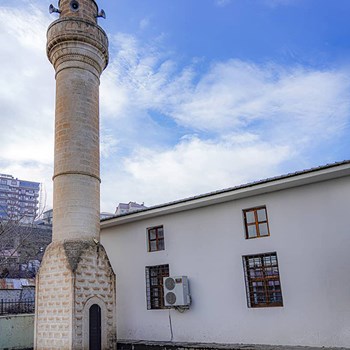 Isfahan Bey Mosque was damaged in the 1971 and 2003 Bingol Earthquakes, and then repaired and partially restored in 2007. The base of the minaret of the mosque, which is thought to be original, has a square plan and round body. The masonry-built Isfahan Bey Mosque, which has lost its original structure because it has suffered many earthquakes and has been repaired, bears the traces of Ottoman architecture.

Isfahan Bey Mosque is the only historical monument and the first mosque in the city center of Bingöl. Another feature of the mosque is that the staircase leading to the pulpit passes through the wall. The pulpit seems to hang on the wall right next to the altar. The pulpit is reached through the stairs built into the wall, by passing through a door opening to the wall just below.