InceburunPlaces to Visit in Sinop

Inceburun is located at the northwest end of the Sinop Peninsula extending to the Black Sea and it is the northernmost point of Anatolia. The Inceburun is comprised of lava and volcanic rocks. The surface of the Upper Cretaceous (Chalk) Period, which was also called the Cretaceoius Period.

The Inceburun is comprised of lava and volcanic rocks. The surface of the Upper Cretaceous (Chalk) Period, which was also called the Cretaceoius Period, during which it occurred 136-65 million years ago, is made up of lavas that are columnar and heavily cracked basalts. Between these two types of environments, an area with more agglomerates than lavas can be seen to slope towards the north and northwest in this section. 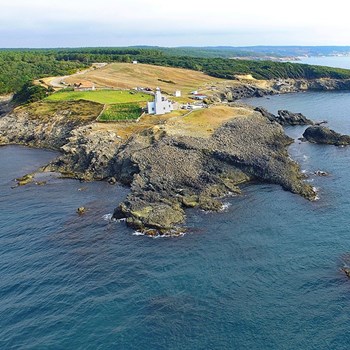 Davsan Island, which is located off the coast of İnceburun and surrounded by steep cliffs, consists of volcanic rock. The closest village to İnceburun is Kurtkuyusu. If we start in front of this village and go north to Inceburun, turn east from there and then continue east until we reach Başkaya Cape, we will notice that the coast becomes rocky and indented.

Mounting 38 meters high, a landmark lighthouse built in 1863 is situated on İnceburun (literally: Thin Cape), the northernmost point of Anatolia. The lighthouse tower is 12 m tall, with a gallery around the lantern room. It sits on a square-plan base and is white in color. The beacon has an intensity of 26 meters height, flashing every 20 seconds.

The lighthouse is accessible but the tower is closed to the public. The lighthouse keeping is served by Family Çilesiz, who do the job in fifth generation.