İnce Minareli Medrese is a 13th-century Islamic school located in Konya, Turkey. Several of its notable architectural features are the calligraphic portal that serves as the entrance to the complex, its covered dome at the center of the courtyard and ornate minaret attached to it, which was partially destroyed in 1901. İnce Minareli Medrese encapsulates many themes typical of Seljuk Anatolia such as centrally planned domes with elaborate brickwork on their exterior surfaces.

The Ince Minareli Medrese is built near the old center of Seljuk rule, at the foot of a citadel hill in Konya; it measures approximately 23.60 meters by 20.30 meters (77.4 feet by 66.6 feet). Along all three sides—north, south and west—lie rooms housing this Islamic educational institution; these are all covered with domes and surrounded by an enclosed courtyard in the middle. 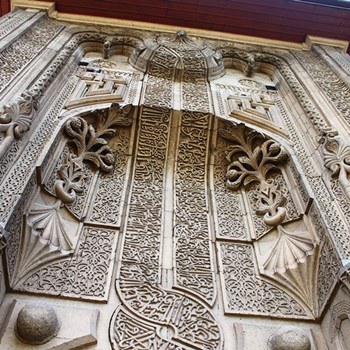 The student rooms are located on the north and south sides of a centrally-placed dome; medrese classrooms are located on the west side. On the east side of the courtyard is a single-domed mosque with space for two balconies or 'şerefes' in Turkish. The courtyard includes a single iwan facing away from its entrance, or consists of enclosures with barrel vaults and rectangular and square spaces that emulate an ancient Persian four-corner layout which became standard during Seljuk Anatolia era.

The portal of the building is surrounded by highly ornamented stonework that stretches up all of its facade. While other Seljuk buildings from the same period occasionally include muqarnas hoods above the entryway, the Ince Minaret Medrese includes banners with sections in thuluth calligraphy.

Geometric and vegetal designs of the facade are shaped into knots, branches, and leaves that can be seen in front. In addition to exposing the stonework and script, it also covers up the layout of the interior spaces behind it.

The dome and the surroundings are illuminated by a lantern that shines on the covered courtyard space. Four triangular pendentives, constructed from exposed brick work, support the structure. The side spaces of the dome are not decorated at all. This provides an open focus to aesthetic properties of central area. The interior is of alternating turquoise and black tiles in geometric patterns that bear an inscription in kufic script.

The minaret is located at the other end of the dome, near the focal point. The Ince Minaret Medrese's name refers to its original extremely tall micro-turreted minaret, which once possessed two balconies when it was built in 13th century. However, in 1901 a lightning strike caused the minaret to fall on the complex's mosque and destroyed its dome; as a result major repairs were required using concrete and glass.

The floor of the minaret is square and made from brick. As it reaches up, the base gradually transitions into a cylinder shape. These bricks are spaced evenly apart in patterns to create an effect as if they were floating. Additional decorations include green tiles and geometric designs on its outer surface. The Seljuks commonly used this type of architecture with such decorative elements for interior walls for their buildings.