The Imera Monastery is a Christian-Orthodox monastery in the village of Olucak, Gümüşhane. It has striking features including its eastern entrance and unique lighting techniques. It is one of the most important religious structures in the eastern Black Sea region. 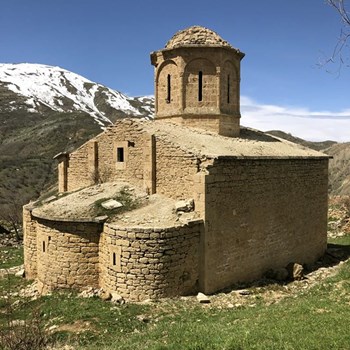 The building is constructed primarily out of cut stones, rubble stone, and masonry. The three apses on the east facade are narrower and lower than the main structure. The roof was built in steps with the middle part of the naos covered by a polygonal dome.

The wall materials are cut stone, carved stone figures in the facade and arches with straight sides. There's a loophole window on the axis of two arched windows on one side of the building. Illumination is provided by three high windows - one adjacent to both rood screens, and an octagonal pulley at each end flanked by crenellated windows.

The colonnades on the dome are separated by arches that span half of the length of each aisle. The pediments over each window are pointed arched, with angel and double-headed eagle motifs embroidered across them. There is also a door to the inside carved in stone at the west end of the south wall.

The entrance to the temple has a half-wall on either side, and there is evidence that it originally had two doors in the style of politeion. The innermost side includes three friezes: grapes come out from above the vase on one, geometric designs around each column frame another, and arrowhead motifs are found along the last one.

Columns are connected to each other by pointed arches and metal braces. Each nave has a vault at the top. The middle space is covered with raised dome in the form of a lantern that covers the niches on the apses. Fresco paintings that can be selected at will have been largely erased, only their remains remain present.