The Hittite İmamkulu Relief is a rock relief near the town of İmamkulu in Tomarza district in Kayseri Province, Turkey. The Hittites made a lot of rock reliefs in all around their country.

The relief is 3.25 x 2 meters and was engraved on the northwest side of a large boulder, with a slightly convex but conveniently flat surface. It consists of three sections: The left section features a human figure walking to the right, presumably the creator of this landmark; he is holding a spear in his left hand and what looks like an arrow in his left (the string is only roughly indicated). On his belt, we see two round knobs and some traces of an unseen sword. He wears a capped headdress and there are also markings indicating sandals with pointed shoes. Luwian hieroglyphs were used to engrave his face which spells him as "Kuwalanamuwa", the son of the king. 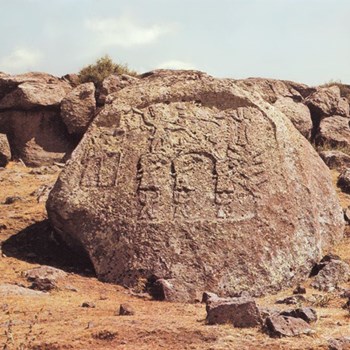 The higher portion of the relief sculpture is clearly a depiction of the weather god in his chariot. He wears a pointed hat with horns, symbolizing that he is a god--a point confirmed by his sword belt and mace. He has one hand on the reins to steer it while driving bulls across the scene.

Above his outstretched hand there are three hieroglyphs which name him as the weather god of heaven; a fourth hieroglyph below the others is no longer legible. The god and his chariot stand on the bent necks of three mountain gods, in a manner similar to the main scene at Yazılıkaya. The wear the long robes and peaked hats which are usual for mountain gods, and are armed with swords. They themselves stand on top of three chimaeric creatures with cat's heads and raised human arms.

The top part of the right portion of the relief shows a facing goddess with raised arms, who is probably Sauska/Ishtar. Her head is in profile, looking left towards the approaching weather god. Her arms hold her robe open. On her head there are four or five prongs of a crown or coiffure. Wings rise up from her shoulders. Ehringhaus identifies a six-pointed star above her right hand. Her legs are depicted without feet, in the manner of cult statues and she stands on top of a stylised tree. Between the weather god and the goddess, is a bird flying to the left. The motif of the weather god and an undressing goddess, often with a bird between them, is attested from the early Bronze Age on Syrian cylinder seals (and other media).