One of the Carian cities, The Idyma Ancient City is located through Kozlukaya village of the Ula district of Muğla province. The acropolis (upper city) is approximately 300 meters in height and situated amongst ruins at Kozlukuyu.

In 546 BC, the Persian armies conquered the Carian region but religion and customs did not change. The Delian League took over from 484 to 405 BC and Idyma is mentioned in a tax list dated 453 BC (the earliest written documentation of the city). 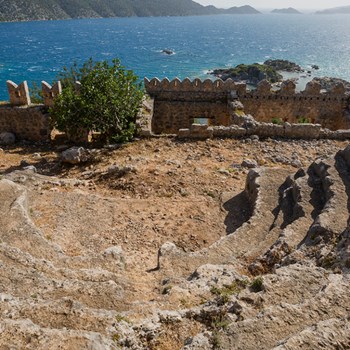 The 200-meter long fortress was constructed during the Hellenistic era, has rooms, cisterns and walls made of stone. French researcher Louis Robert discovered this fortress in 1937 after noticing remnants of domestic life on top of an ancient Acropolis. Idyma remains relatively recognizable through these successive periods as a polis or city with Rhodian citizenship until the 4th century BC. The city was occupied by the Macedonian King Philip V in 201 BC, and General Nikagoras of Rhodos regained control of it for Rhodes in 197 BC. Rome included Caria as part of its operation area in 129 BC. It is known that people settled here during the Byzantine period, but it seems they abandoned the settlement when importance decreased.

Idyma is still a tourist destination today because of its archaeological sites, including the ruins and rock tombs located on top of Küçük Sakar.