The Hoşap Castle is a medieval castle built in the village of Güzelsu, about 50 km far from Van city center. Most of the surviving part of the castle was constructed in 1643 by Sarı Süleyman Bey, chief of the Kurdish Mahmudi tribe. The meaning behind the name translates to "beautiful water" in Kurdish.

Although the castle is not particularly old for the local standards as it dates back to the mid-17th century, The location is near an ancient Urartian fortress, where according to Mehmed Top, history of Hoşap goes back in to the Kingdom of Urartu when it was a military stronghold, standing at the crossroads of two strategic roads. 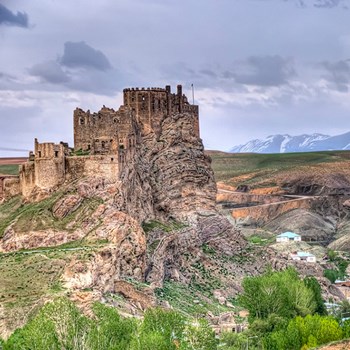 The region was later conquered by the Persians and then controlled by the Macedonian army. It has been ruled consecutively by empires including Seleucid, Roman, and Byzantine. The area was a part of Vaspurakan in 10th century; an Armenian kingdom centered around Lake Van which declared independence from Persian control at this time.

The castle consisted of an outer keep and inner keep. The outer keep was surrounded by a line of walls, and their fragments can still be seen to the east and the north as a characteristic line of mud-brick defences. The castle was additionally protected by Güzelsu Creek, flowing along its western and southern perimeter. Whereas three bastions out of original forty are still extant, but the location of the eastern and western gates remains unknown. Nowadays there are several dozens houses within the outer keep as well as converted mosque known as Kale Cami.

Travelers follow the winding road that leads up to the main gate of the inner keep. It is located on a magnificent round tower and has walls four meters thick with an opening for entrance towers. The reliefs depict two lions carved in black basalt, standing next to each other and under them is an inscription carved into muqarnas decoration stating when this fortress was built in ancient Persia.