The Cathedral of Kars or Holy Apostles Church, which has served as an Armenian Apostolic church, Russian Orthodox cathedral and Turkish mosque over its history, is a 10th century structure at the heart of present-day Kars. 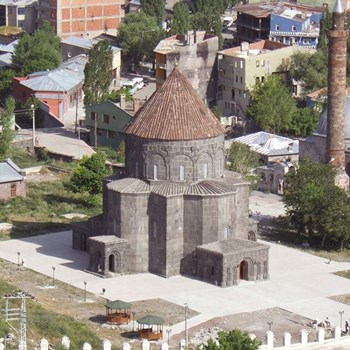 In 1993, the church was converted into a mosque and renamed Kümbet Mosque. Today, it is part of a larger Muslim complex that also includes the Evliya Mosque - one of the largest mosques in Kars.

It is a central planned domed tetraconch, and imitates the seventh-century Church of Saint John, Mastara. The main entrance of the church is on the western side. It has two more entry points one on each of its south and north sides. Externally four dihedral angles are seen to protrude out from all four cardinal directions that lead into an octagonal extension for seven additional bays before forming a curved dome in front or back with each nave terminating at opposite ends; they can be clearly seen externally where right angles overlap three meters past into external walls that mirror them inside were they're displayed by unobstructed straight angular lines marking four articulated corners made up of cylindrical squinches centered over square.