Hizirbey Mosque is located in the center of Kırklareli. It was built by Köse Mihalzade Hızir Bey in 1383. The outer walls, dome and minaret are covered with a smooth-sided surface. Situated on a 15x15 meter foundation, it has an interior area of 328 square metres and sits on a 1470 square meter plot. 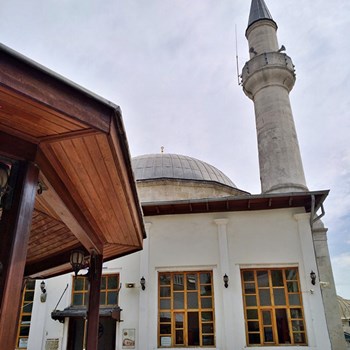 It has a capacity that 1000 people can worship at the same time. The rectangular planned narthex, which was destroyed as a result of an earthquake and rebuilt afterwards, was repaired in 1824 by Hacı Yusuf Pasha from Aydos. It was repaired again by Tosunoğlu Ali Efendi in 1887.

Its minaret is made of carved stone and includes a single balcony. The Mosque was destroyed in half by the Bulgarians during the Balkan War, but has since been reconstructed. It is open to worship, and in 2007 underwent another restoration that matched the original form.

It is a very early Ottoman structure with many hand painted ornaments that was written by the calligrapher Tevfik from Kastamonu in 1308. One of its features is; The mosque, which sits on a 15x15 meter foundation, is similar to the Kaba-i Maazzama in these dimensions.