The HippodromePlaces to Visit in Istanbul

One of the largest and most central spaces in Byzantine Constantinople, The Hippodrome was at the heart of many important civil activities. Thousands would gather to spread propaganda or popular sentiment but it also served as a place for more volatile behaviors like rebellions and fights. It served these functions for centuries until becoming more known as a sports facility where chariot races took place. Eventually though it became common knowledge that horse racing could take place here with Ottoman use coming after that. 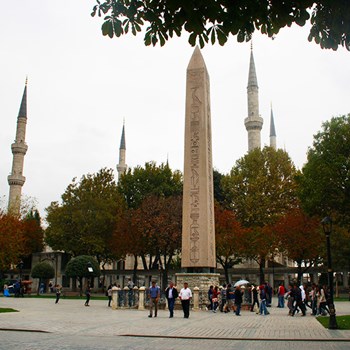 There are many monuments around the Hippodrome area. The most striking is the Egyptian Obelisk, originally constructed by Pharaoh Tutmosis III (1549-1503 BC). It was 200 feet high and weighed 800 tons, but when shipped from Egypt to Constantinople it broke in three pieces and only top of it survived. The obelisk was erected in 390 AD during the reign of Theodosius I. The marble base holds sculptured reliefs that depict the Emperor's watching a chariot race with his family. It is made of pink granite and it depicts Pharaoh Tutmosis III with Sun God Amon Ra.

Another monument in the hippodrome is a column made from three bronze serpents intertwined. It was brought over from Temple of Apollo, Delphi, Greece.

The third monument in this area is called "Colossus" or "The Column of Constantine". In contrast to the Obelisk, it appears more eroded and researchers believe its purpose has parallels with Egyptian Obelisk.

The last monument in the Hippodrome Area is the German Fountain or "Fountain of Kaiser Wilhelm II". It is an octagonal building with taps around which was constructed in 1898. There are lovely mosaics inside that depict the signatures of Emperor William II and Sultan Abdulhamit II.