The Hevsel Gardens are first mentioned in ninth century BC Aramean chronicles, which is much longer ago than the settlement of Diyarbakır (originally called Amid), and it was constructed on a basalt escarpment overlooking the Tigris River.

In 866 BC the city, under attack by Assyrian King Ashurnasirpal II, was besieged and when it fell the gardens were destroyed as punishment. The fortified city has been of importance in the region during the Hellenistic period, and during Roman, Sassanid, Byzantine, Islamic and Ottoman Empires up to modern times. 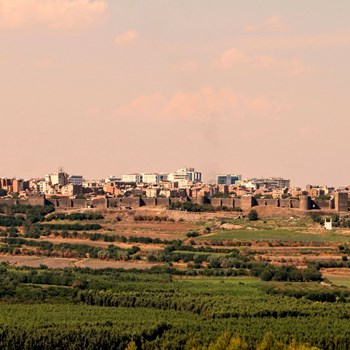 The Hevsel Gardens were created to provide drinking water and food for city residents below the flowing Tigris River. The gardens are divided into five terraces to control the flow of irrigation water in this area.

The uppermost parts of the gardens were critical to the placement of this city. More importantly, the gardens were regarded as sacred because they represent an important provisioning role and have been compared to dominion over a garden like the one in Eden.

By 1655, the gardens included both banks of the Tigris and were said to be filled with flowers. Nineteenth century travelers visited and reported seeing great varieties of vegetables and fruit grown. They commented on melons, grapes, apricots, one of which was famous for its watermelons on sandy islands formed by braided river.

The gardens were integrated with the city, separating vegetable gardens and also providing trees for other purposes such as silk production (mulberry trees). The agricultural produce from the garden was shipped to nearby provinces on rafts, while timber was produced from poplar and willow trees in the garden.

The Diyarbakir Fortress and Hevsel Gardens were declared a UNESCO World Heritage Site in 2015.