The city of Heracleia was founded at the farthest eastern point in the Latmian Gulf, near Mount Latmus. Heracleia at Latmus was once a Carian settlement from 5th century BC that belonged to the Delian League and paid an annual fee of 1 talent. In 4th century BC, Mausolus conquered it and rebuilt the city according to Hippodamian urban planning principles which had been used in Priene and Miletus before.

Heracleia thrived in Hellenistic periods due to its maritime trade. From Strabo's account, we know that even by the first century BC, Heracleia was prosperous enough to have access to the sea. In Byzantine times, it became a place sought out by hermits and monks because it had access both on land and at sea; they built many churches and monasteries along Lake Bafa's shores and atop Mount Latmos. 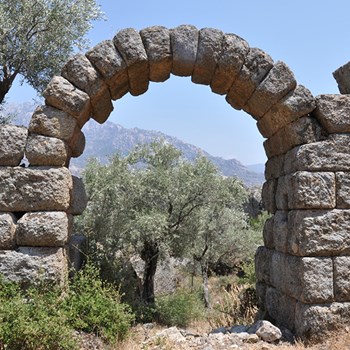 The 6.5 km long walls surrounding the ancient city of Heracleia were built by Mausolus and were later expanded by Lysimachus in 287 BC. These remains are some of the most well-preserved examples of this type, and have 65 towers to defend against invaders before entering.

The most important temple in Heracleia was dedicated to the goddess Athena. You can find its remains on a hill overlooking the city's ruins from that period. The temple consisted of an inner chamber and a colonnade surrounding it.

A section of the Agora Wall, dated to Hellenistic times, is still well-preserved. Remnants from the period when the Bouleuterion was used have been found, including architectural pieces that indicate this building resembled one at Miletus. The so-called Endymion Sanctuary was a temple with a prostyle form made up of four columns in front and one in back. Among the other ancient buildings in the city of Heracleia, Romans baths and a theater are of particular note. This city also has a Byzantine fortress which houses tombs carved into rock. Some of these are now flooded by nearby Lake Bafa.