Cennet (Heaven) and Cehennem (Hell) are the names of two large sinkholes in the Taurus Mountains, located in Mersin Province, Turkey. The sinkholes have become tourist attractions for their impressive size and unique features. 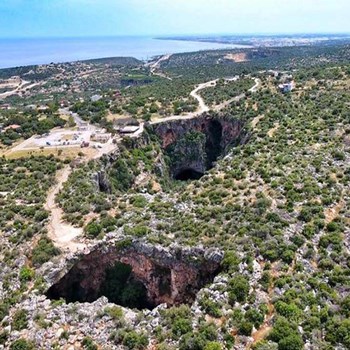 The Cennet (Heaven) is 250 x 110 m2 (820x360 ft2) and its average depth is 70 meters (230 feet). There are 300 steps that lead all the way to the bottom of the cave where, towards the south, there's a smaller cave at an average penetration depth of 15 meters. In this small cave, you can hear a small underground stream flowing to Narlıkuyu Bay.

A church was built at the entrance of a cave. The four-line inscription on the front door of this church indicates that it was built in honor of the Virgin Mary by Paulus for whom there is no surname given.The apse of this church was ornamented with frescoes during the 12th century AD. Today, much of that artwork has been worn away by the elements.

Cehennem (Hell) is a deeper sinkhole with a depth of 128 metres (420 ft). But its top opening, which has a smaller area than the surface area, is 70 x 50 m2 ( 210 x 150 ft2). Since the upper edge of this opening curves inwards, there's no way to access what lies below. According to mythology, Zeus temporarily held Typhon in Cehennem before imprisoning him under Mount Etna.