The Hatay Archaeology MuseumPlaces to Visit in Hatay

The Hatay Archaeology Museum is one of the largest museums in region hosting more than 2500 mosaic items dating back to Roman and Byzantine periods. It is known for its extensive collection of Roman and Byzantine Era mosaics. The museum was constructed under recommendation of French archaeologist Claude M Prost on 1934. It came under Turkish control following 1939 annexation of Hatay Province with Republic of Turkey. 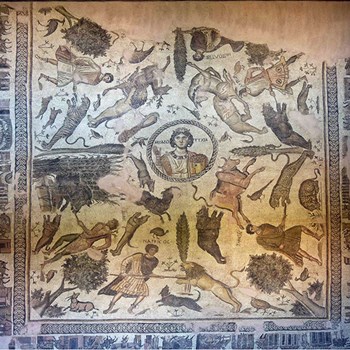 The Hatay Archaeology Museum was opened to public in 1948 depicting various collections from different civilizations until its renovation in 1975. The mosaics currently in display were mostly discovered by French archaeologists. The mosaic collection consists of Byzantine and Roman era stone flooring from ruins of ancient cities, villas, baths and churches.

Hatay has a rich collection of mosaics dating back to the Hellenistic era, and the Roman Era from 2nd to 3rd centuries. They have been found in the ancient cities of Daphne, Seleucia Pieria (Samandağ), Antioch and Tarsus. The most famous figures among those depicted by these mosaics are Dionysos, Orpheus, dancers- including Ariadne Abandoned from Defne (Yakto).

Excavations in the region have uncovered many artifacts of different periods. These include glyphs, relief sculptures, frescoes and statues that date back to the Hittites and extend into the Roman era. They can be found at such sites as Guneyde, Dehep, Catalhoyuk, Tainat Ac-ana Defne-Harbiye and so on. The collections also includes objects from Antakya and surrounding areas.