HasankeyfPlaces to Visit in Batman

Hasankeyf is located on the shores of the Tigris River in southeastern Turkey. It was once a crucial trade spot on an ancient trade route and has seen many important historic events throughout its history, even dating back 10 thousand years ago. In 363 AD, the Romans built two fortresses there that served as staging points for troops targeting Anatolia and China respectively during their campaigns in Persia and Central Asia.

Over time, Hasankeyf became home to many different cultures which left traces like evidence of Arab occupation from 640 AD until now where it is still known by several nicknames including Hisno Koyfa meaning "Rock Fortress", eventually becoming Hasankeyf. 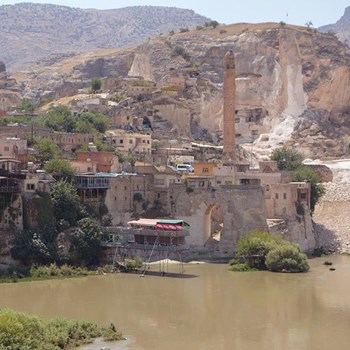 Built solely from stone, Hasankeyf is situated on the banks of Tigris River and 150 meters high from the river bed. The city feels like an open-air museum with beautiful buildings everywhere. Most of it has been carved into the rock surrounding it, giving off a feeling similar to that of Cappadocia.

The castle in the city is one of the highest points and provides a panoramic view of the surrounding city. Roman forces built it hundreds of years ago, and its height made it difficult to attack.

The city has a lot of Islamic buildings, including El Rizk Mosque, The Great Mosque, Suleyman and Koc Mosques. All of these mosques are from the 14th-15th century and were built when Eyyubids controlled the city. They all exhibit Arabic architectural characteristics with round minarets.

One of the most beautiful sights in the city is The El-Rizk Mosque that features a round minaret and portal gate. The 99 different features of Allah are carved on the gate.

The city has a new bridge to pass to the other side; there is also an ancient bridge, which offers very picturesque scenery. Because of a dam project, which raises the level of Tigris River for another 150 meters, the city is under more risk of going underwater if the project does not stop soon.