Harbiye - DaphnePlaces to Visit in Hatay

Harbiye is located 7.5 km (4.7 miles) south of Antakya and looks out on the Mediterranean Sea from its steep hillside location. Before Antakya took on the name Hatay, it was called Antioch-as-Orontes due to its strong Roman influence. As such, many wealthy Romans chose to settle in this area and built beautiful homes with beautiful mosaics. 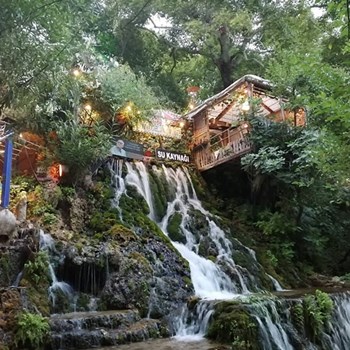 Known for its waterfalls and world-renowned summer resort from the Hellenistic and Roman periods, Daphne was home to many mansions, temples, and entertainment venues built by wealthy citizens. During the reign of Emperor Gallus (ruled A.D 253-268), Daphne could no longer capitalize on its former glory. The Arab invasion that followed in 637 AD ensured that it couldn't return to past prosperity. There are no remaining structures from the ancient period unfortunately.

The heart-touching love story of Apollo and Daphne can be found in Harbiye. This happens to be the place where Apollo fell deeply smitten with the fair maiden, who was persecuted by her father, Lord Zeus coming down from Olympos. Zeus helped his daughter escape from this supreme god’s pursuit and first transformed her into a tree, waiting for it to come out as an inscription on one of its trunks “I am Daphne”.