Hallac Hospital Monastery is located in a serene valley, northeast of Ortahisar town in Nevsehir. Even though it is close to many highlights of Cappadocia, the only people who often visit are those on Jeep Safari Tours.

The central feature in the Hallac complex is a three-sided courtyard with some pigeon houses on elevated rock levels. In the courtyard, over one meter of silt has accumulated due to decades of neglect. 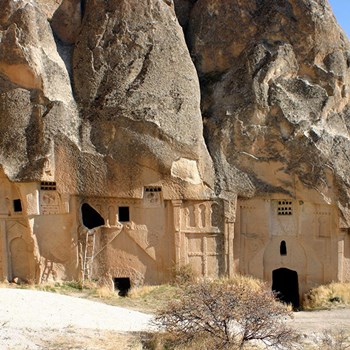 Behind the north façade, two square rooms measuring 4 by 4 meters flank the long central hall. The three halls connect via internal passageways. The west room was originally carved as a recessed area with elaborate decoration and later used to house pigeons and other animals.

The central hall follows the basilica plan, with a barrel-vaulted room flanked by flat side-aisles. Five pillars in the center of the building support six short arches on each side. The circular ceiling springs from a protruding molding along both sides. At each end of the space, an arch creates an apse at either end of the long rectangular room. These rooms were likely living spaces for people.

The smaller room (8 by 12 meters) on the west side of the complex is in poor condition. The northwestern corner entrance led into an L-shaped cross-in-square arrangement with a central dome, reminiscent of nave architecture. In comparison to other churches from this period, this space lacked east apse or aisle structures; instead it was more like a large private chapel accessible through doorways outside and inside of its walls.

A very strange person figure hangs from the east arch. This is the only human figure carved into the rock in Cappadocia. He wears a tunic robe and pointed hat, which suggests that it may have been created by a Georgian mason who immigrated to Cappadocia during construction of this church, or even by local artists reflecting on what they had seen in Georgian architecture around them.

Towards the south, a large room that once housed a kitchen is mostly eroded inwards now. The square space was designed with a cone-shaped ceiling and chunk of burnt rock for smoke to escape through. Rooms are lined along the upper level.