HalfetiPlaces to Visit in Sanliurfa

Halfeti is a small farming area along the Euphrates River that is roughly 120 kilometers from Şanlıurfa City Center. The town’s history goes back to 855 BC when the Assyrian King Shalmaneser II first established it as a settlement. During the Roman era, Akamai thrived in this area and changed its name to Koyla during that time.

Throughout the centuries, Halfeti saw rule from many civilizations spanning back to Roman times. Starting in the 6th century AD, Sassanians (Persian empire), Arabs, Umayyads and Abbasids all took their turn ruling for different time periods. Seljuks got control of Halfeti in 11th century AD and it then became a part of Ottoman Empire by 16th century AD. 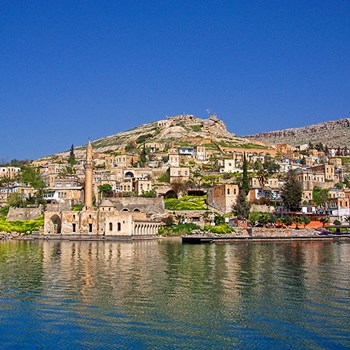 In 2013, Halfeti became a member of Cittaslow movement, which is inspired by the slow movement. The goal of this group of small towns (populations below 50 thousand) is to improve quality and enjoyment through slowing down the pace and the focus on quality over quantity. This movement offers support for local governments in the development and protection of tradition, cuisine, and nature.

Much of Halfeti was submerged under water due to a dam built in the 1990s, and so a new town was subsequently constructed 15 kilometers away. As such, the settlement is divided into old Halfeti and new Halfeti.

Old Halfeti can be reached by renting a boat and the view of semi-submerged houses, trees, minarets, and monuments provides a wistful experience. One of the most iconic views is from the half sunken minaret of Savaşan Koy at Halfeti. Halfeti houses consists of two stories, flat roof, and made up of stones. They face Euphrates which means there is no shadow cast by another house as each building is parallel to the next.

Apart from its historical and architectural value, Halfeti is also famous for its black roses. These rare roses only appear in the summer season every few years because of the unique conditions of the soil in this area and from the pH levels derived from groundwater originating nearby the Euphrates River. The roses first look dark red when they emerge but then turn black once it gets warmer out. They’ve almost died off now due to floods submerging old Halfeti with water.