Sanliurfa is an ancient city with beautiful mosaics nearby. The remains of the ancient Greek city of Edessa are found beside Halil-ur Rahman pool in the heart of Sanliurfa, and amongst them are a number of colourful and intricately designed Haleplibahce mosaics.

The mosaics discovered in Haleplibahce are exhibited at the Haleplibahce Mosaic Museum. These are the first examples of Amazon warrior queen's depictions in the world - done with careful precision using stones gathered from the Euphrates River. 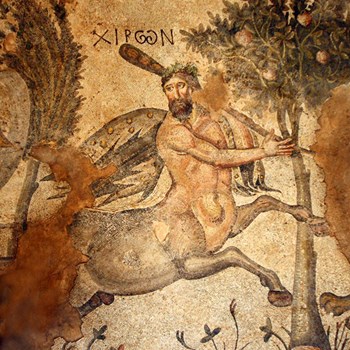 The mosaics, as well as being a fine representation for Eastern culture, are considered among some of the most valuable pieces because they were created with only 4mm2 colored stones. The mosaic art is especially captivating due to how finely detailed these small stones can be turned into artwork that fills an entire room and exceeds human comprehension.

Ktisis Mosaic : Bust of the goddess Ktisis with a crown adorned by pearls and gems is depicted in the mosaic. Her earrings are fashioned similarly, and she is wearing rings around her fingers made from gold with oval-shaped pearls.

Achilleus’ Life Mosaic: Figures from the life of Achilles are depicted on the front panel that covers most of this wall. These figures, respectively, show baby Achilles at the breast with his nursemaids, Troy War I by waving goodbye to her mother, death goddesses who reach out as if to catch hold of him and take his thread of life in transit when he is dipped into Styx River so he may be immortalized through bathing before being taken away by wise Kheiron; Thetis following him sadly away from his family to follow fate's decree. The border surrounds a panel depicting figures enjoying farm life - playing instruments, running through fields, standing around outdoors, and grazing horses.