Hakkari StelesPlaces to Visit in Hakkari

In 1998, 13 stone steles were found on the northern skirts of the Medieval Castle in Hakari city center. They vary in height from 0.70 meters to 3.10 meters and depict naked male figures wearing codpieces with a dagger hanging above them. 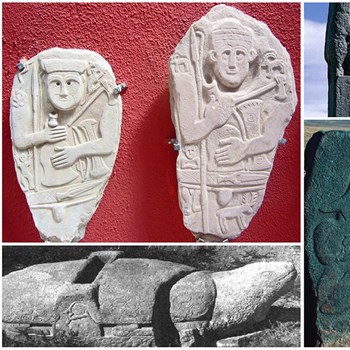 Figures are depicted holding containers in their hands. These include human skin, axes, daggers, knives and spears as well as wild animals like goats and deer. Two of the stelae have different characteristics that make them seem to belong to women.

Steles made in Hakkari were created by different craftsmen but adhered to certain rules. These steles belong to the ruling class who live in tents, which are understood to be from the second half of the 2nd millennium BC.

In contrast, these stones are not seen very often in ancient Anatolia and the Near East. In particular, there is a long time difference between them that spans from 3rd millennium BC to 12th century AD. There’s also strong ties between stone statues of the Gokturk period and Central Asian tombstones due to their shared vessel held in both hands.