The Hagia Sophia Church or Church of the Holy Wisdom in Trabzon is located in the heart of the city and an example of late Byzantine architecture, making it one of the most important sights in Trabzon.

Built at some point in the 1250's-1260's, close to the end of Emperor Manuel I's reign (1231-1263) of the Empire of Trebizond, when Trabzon was conquered by Mehmet II (1451-1561) in 1461 it had been converted into a mosque with its frescoes whitewashed without harming the frescoes.Islamic law prohibits the use of “idols,” including images in any religious buildings and that's why the walls were whitewashed with limestone. 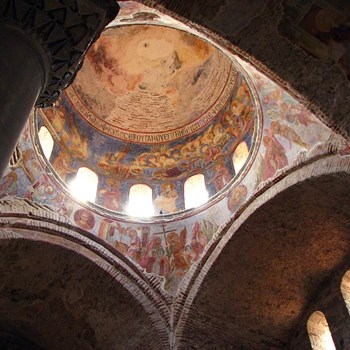 Between 1958 and 1964, the colorful frescoes of Hagia Sophia were uncovered, restored and stabilized by Edinburgh University teams with the Turkish Directorate of Foundations. In 1964 it became one of Trabzon's must-see sights when it was opened as a museum. The narthex, a fresco-filled area that is not part of the worship area, remains outside the building as a museum and in close proximity to its exterior.

The church is 22 meters long, 11.6 meters wide and 12.7 meters tall - details that are apparent upon viewing the late 13th-century frescoses on its wall, illustrating themes of the New Testament. The external stone carvings of figurative reliefs and other ornamentation is also in keeping with local traditions found in Armenia and Georgia. 24 meters west of the church is a bell tower 40 metres high that houses only a small chapel on its second floor. The interior of the bell tower is covered with frescoes and served as an observatory for local astronomers.