Findings that point to the first phases of the Chalcolithic Age were unearthed in both the 1st and 5th layers, which are new among all of the cultural layers found within Hacılar Höyük. Among these cultural remains are colorful pottery decorated with geometric motifs and the Mother Goddess figurines. Similar ones were unearthed in Çatalhöyük and other contemporary settlements. Bones and other cutting tools found in the finds are the evidence of a society transitioning from nomadic to settled life. 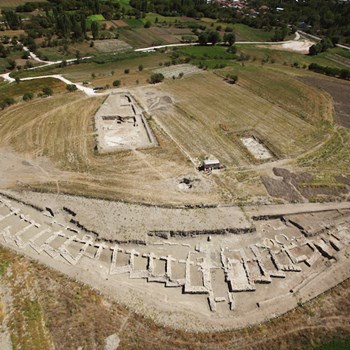 The houses built in Hacılar were single-roomed or rectangular, with a door opening to the courtyard. The walls of the homes are made of mud bricks and have red paint. Some homes had niches in their walls extending 1 m into its thickness. Ovens and benches were found in every home found during excavation for this settlement. Steps near doors were also discovered, suggesting that these houses may have been built on two levels instead of one floor as previously thought. It is believed that inhabitants buried their dead outside the settlement boundaries, rather than within it as commonly practiced by other civilizations at this time period.

The ceramics unearthed in the city of Hacılar represent a critical piece of information related to the Neolithic Age. The animal-shaped vessels present here and currently on exhibition at Burdur Museum were used for religious observance purposes, and they deserve particular attention.

Within the Hacilar archaeological site, there are figurines that generally depict females. These terracota figurines, which are the characteristic finds of Hacilar, have an exaggerated proportion. Compared to other Neolithic sites in Turkey such as Konya Çatalhöyük, these Hacilar figurines seem more lively and active. Discovered during excavations, cereal grains and cutting tools such as obsidian, horn, and slexus document the development of agricultural culture in Hacılar.