Habib-i Neccar Mosque is a historical mosque in Antakya, Hatay Province, Turkey that is dedicated to Habib the Carpenter. It is situated to the east of Asi River. 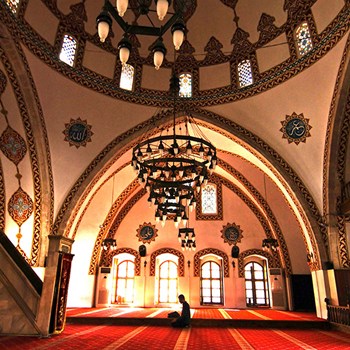 The mosque was originally a pagan temple and converted into a church in the Christian era. The city has been captured by different powers in six other invasions including: Rashidun Caliphate (637), Byzantine Empire (969), Seljuk Turks (1084), Crusades (1098) and Baibars of Mamluk Sultanate (1268).

Concurrently in each case, the status of the building was changed from church to mosque and from mosque to a church. However, in the inscription of the mosque, it reads that it was rebuilt again in 1275 soon after Baibars had converted it to a mosque.

The mosque was destroyed in the 1853 earthquake, but it was rebuilt by the Ottomans. The minaret is also older, and therefore exists while the shadirvan (ablution fountain) is newer.