Guzelyurt VillagePlaces to Visit in Nevsehir

Guzelyurt or Gelveri, a town in Cappadocia, is one of the most interesting destinations. There was an active population until the 1920s with many Christian Orthodox families. Houses were used actively until 1924 when a population exchange occurred between Greeks and Turks.

All the Christian citizens from this town and all over Turkey had to leave their country to Greece as well as all the Turkish Muslim citizens in Greece had to move out from Greece to Turkey because of the same population compulsory. According to the officials, about 1.2 million Christians left Turkey while about 600.000 people came from Greece. 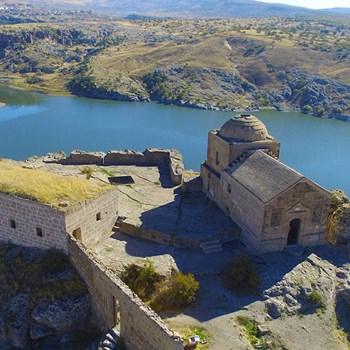 The people who left Greece were accommodated in the houses of Greek villagers whose villages they left. As there were less people coming than those leaving, most of these houses remained empty and nobody was using them. Sadly, many of these homes fell victim to decades of neglect as a result.

Guzelyurt has many churches, but the best one is the Church of Saint Gregorius Ologos Nazianzus. Built in 385 AD, this church is the oldest known church to date in Cappadocia and its surrounding region. The town was originally populated by Christian families and had three fathers who worked hard to improve Christianity a lot in Guzelyurt, Ihlara Valley and surrounding area: St. Gregory or Gregorius was one of them. This church was eventually converted into a mosque after 1924 because of the population exchange and lack of Christians in the region . So now it is possible for visitors to visit this church and see how big the Christian population once was in Guzelyurt.

The town of Guzelyurt has two underground cities and a nice viewpoint that looks over the St. Gregory Church and Mount Hasan, which is one of Cappadocia's volcanoes. While walking up to see this view of the village from above, you can also spot Sivisli Church that dates back to 19th century.