Güvercinkayası, the pioneer of the castle city model in Anatolia, is located on a high rock mass in Mamasin Dam Lake and dates from 5200-4750 BC.

Archaeological excavations in Güvercinkayası started in 1996. The excavation site spans from the Middle Chalcolithic Period to today and contains one of the earliest examples of a "castle city" discovered in Central Anatolia. 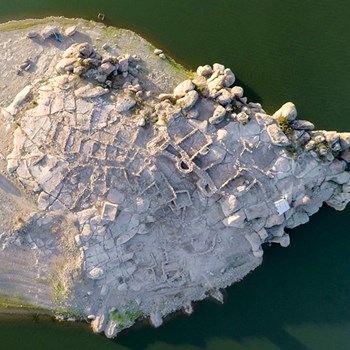 The discoveries unearthed during the excavation show that this village, often considered a forerunner of future Anatolian cities, interacted with other regions. Some pottery points to connections across Anatolia and Mesopotamia.

The village is divided in two by the inner castle and lower settlement with the fortification walls at the summit of the rock. The citadel dwellings, which ended in a heavy fire, are comparatively larger and richer in finds when compared to the low settlement dwellings.

The settlement pattern reflects the narrow, long, 20 to 30 square meters one-room houses arranged in residential blocks, separated from each other by narrow streets, all building on the natural shape of this rocky mountain. At the back of these houses--the only rooms where people can share walls--there is storage for grains and family necessities. The fortification wall separating this peak plain from terrace and slope dwellings is an early example of how quickly wealth classes separate themselves through living style choices.

Animal remains unearthed at the excavations have revealed past existence of predators such as red deer, great deer, roe deer, wild cattle, wild sheep, goats and lions. Güvercinkayası is now an integral part of the lively life in and around Mamasin Dam Lake.